Greetings,
Because of covid 19 our open veterans and sojourners award nights was canceled and the awards will be sent in the mail except for a few fifty plus awards, which will be hand delivered following the covid restrictions. Even though our building has been temporarily closed and Lodge placed in temporarily darkness, we are still active behind the seen. Inquiries are welcome any time about membership so feel free to reach out through this site. Looking for some great reading? Click on our Online Resources page then the Onondaga & Oswego Masonic District Historical Society, you won’t be sorry you did….

Brethren, Liverpool Syracuse N0. 501 would like to announce that W∴Timothy Hansen will be taking the helm of  Brotherhood Chairman. Our appreciation goes out to our DSA Brotherhood Chairman Lee Wiggins for the many years of dedicated service he has contributed to this position.
We wish him well on the sidelines!

Congratulations to the Officers of Syracuse Liverpool Lodge

Adhering to NYS reopening guidelines and the NYS Grand Lodge directive on social distancing and facemasks, Syracuse Liverpool Lodge No.501 successfully elected and installed their officers on Monday, Aug 3rd 2020. The five elected officers installed are

Our new brothers will be receiving their Fellowcraft Degree on April 6th.

April 11th The Saturday before Easter
Mark your calendars

There is no need to expose our members to illness of any kind at this time of uncertainty.
Precaution is the best plan.

The next stated communication is scheduled for April 6th and as for now the plan is to have the 2nd degree at this time. 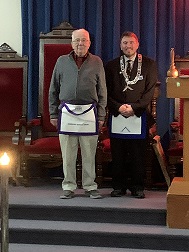 On Monday Nov 4 2019 the Master of Liverpool Syracuse No.501 brought W.’.Ben Lees to the east to give recognition for his forty years of dedication to the craft. He also presented a Past Master Apron to W.’.Jorge Luis Romeu recognizing his accomplishments during his year as Master.

Albert R. Sahm November 1, 2019 Albert R. Sahm, 93, of Liverpool, passed away peacefully with his family by his side on Friday. Albert was born August 27, 1926 to Estella and Roy Sahm in New Bremen, and grew up on Dewberry Drive in Rochester. He served as a yeoman in the Navy during WWII, and was stationed in Hawaii. Albert and Anne lived in both Rochester and Syracuse briefly before settling in Liverpool to raise their family. Al worked at General Electric as an engineer, but held many jobs throughout his life including television repairman, bus driver, salesman, grocery manager, and realtor, in addition to serving as Mayor of Liverpool. He was predeceased by his wife of 57 years, Anne Costello Sahm; his brother Ralph Sahm and brother-in-law Dan Tucker; his children-in-law Cindy Gordon-Sahm and Francisco Lespier. He is survived by his six children: Raymond Sahm, Mary Anne (Daniel) Brigandi and Kathleen (Van) Hepfner, Margaret (Gene) Caiello, Elizabeth Lespier and Jeanine (Chuck) Fieldson, nine grandchildren, eleven great-grandchildren, his sister Ruth Tucker and sister-in-law Lois Sahm. There will be no calling hours. A Mass of Christian Burial will be celebrated on Saturday, November 9, 2019 at 9:30 am in Immaculate Heart of Mary Church, 425 Beechwood Ave., Liverpool. The Rite of Committal and burial will be private in Onondaga County Veteran’s Memorial Cemetery. In lieu of flowers, donations may be made to Immaculate Heart of Mary Church.

Overview of Electoral Polls and their Statistical Problems

Open to the Public

Announcement of Presentation on November 20 2019

The Electoral Season always brings up the vote intention from polls (or surveys) that candidates, pundits and journalists use (and even misuse) to assess who is ahead in each political contest. We often hear or read that “candidate X is ahead, with 47% of vote intention, to only 45% for his opponent”. Such statement is statistically incomplete and incorrect. In addition, there are other technical complications.

For example, many people use cell instead of land phones, which are mostly unlisted. Hence, these people are difficult to reach by surveys. Others, use answering machines and caller Id devices as screening mechanisms, to identify callers before deciding to take their call. This curtails access to many potential survey subjects, which can seriously invalidate (or bias) the sample and its results.

Such problems have resulted in some polls grossly overstating or understating the status of the candidates. Recent cases include the US 2016 presidential election and the British referendum on Brexit The current presentation will discuss surveys and their problems in layman’s terms.

Note: Dr. Jorge Luis Romeu is a professional statistician with 45+ years of experience in teaching, research and consulting. He retired Emeritus from SUNY Cortland, worked as Senior Engineer, for IIT Research Institute, in the Reliability Analysis Center, Rome Lab, and was, for 16 years, a Research Professor, at Syracuse University. He currently teaches part time graduate statistics courses at SU.

John “Jack” G. Butler, Jr. October 19, 2019 John “Jack” G. Butler, Jr., 77, of Skaneateles passed away on October 19th at Francis House surrounded by his family. A loving husband, adoring father, and kind-hearted Irishman, he was born on February 20, 1942 in Syracuse, the eldest child of the late John G. Butler and Jane Burns Butler. John was a proud veteran of the U.S. Air Force, serving in Aviano, Italy. He was a 1965 graduate of Simmons School of Mortuary Science, a licensed funeral director, and a retired sergeant from the Onondaga County Sheriff’s Department, having served the department for over 30 years. John was a gregarious, kind, and generous man who loved people and could strike up a conversation with a stranger in a matter of minutes. His life’s motto, a poem borrowed from the Girl Scouts, was “Make new friends, but keep the old, for one is silver and the other gold.” He aimed to bring a smile to anyone who crossed his path because he always said, “you never know what kind of day someone is having”. Whether he was giving out candy bars to the veterans, adorning the graves of family, friends and colleagues to keep their memory alive, or helping a friend through hard times, he touched the lives of so many. A true gentleman, and an Irishman to the core, John treasured the moments when he could share a smile and a story with all those whom he had the good fortune to meet. Proud of his heritage, he was a devoted member of the Cavalry Club and served on the Troop D Veterans Board of Directors for many years. He also served as a member and former President of the Deputy Sheriff’s Benevolent Association. He was an active member and past president of the Central New York Funeral Directors Association, a member of the New York State Funeral Directors Association, Fraternal Order of Police, Irish Cultural Society of Central New York, American Legion Post #239 Skaneateles, U.S. Coast Guard Auxiliary, New York Guard, Ancient Order of Hibernians, a 40-year member of the Masonic Lodge No. 501 Liverpool, a life member of the Tigris Shrine, Central City Commandery, Central City Riverside Royal Arch Masons, 32nd degree Scottish Rite Valley of Syracuse, Central City Cryptic Council, Masonic War Veterans, Skaneateles Masonic Lodge #522, and the Skaneateles Rod & Gun Club. John will be greatly missed and is survived by his wife of 54 years, Barbara (Comstock); three children, Stacy Drake (Dale), John G. Butler, III (Christa), and Jennifer Grippa (Chris); five grandchildren, Michael, Patrick, Hannah Jane, Chase, and Carson; three step grandchildren, Alex, Matthew, and Christopher; his sister Anna Janet Maloney-Brobst (Bernie) of Florida; his brothers Anders Butler (Deborah) of Syracuse, J. Langley Butler (Eileen) of Virginia, William Butler of Massachusetts; and many nieces, nephews, and cousins. Calling hours will be held on Friday, October 25th from 4 to 8pm at Robert D. Gray Funeral Home, Skaneateles, with a Masonic Service at 7:45pm. Funeral services will be held at St. Mary’s of the Lake Catholic Church, Skaneateles on Saturday, October 26th at 10:00am with a private burial to follow at Lakeview Cemetery. Following the services at 1:00pm, family and friends will gather at John’s favorite spot, the Cavalry Club, Troop K Road, Manlius to toast to his life and honor his memory. In lieu of flowers, contributions in John’s name can be made to Francis House, 108 Michaels Ave., Syracuse, NY 13208 or SAVES Ambulance of Skaneateles, or any of the organizations that John loved and supported. The family would like to thank the talented and caring physicians and nurses at St. Joseph’s Hospital in Syracuse, all of whom worked hard to care for John and prolong his life, and to the caregivers and volunteers at Francis House who gave him the very best last days of a full and rich life.